My name is Ágnes Nedeljkov and I live with  my husband Ljubiša in Senta,

a lovely small town in Serbia not far from the Hungarian border.

Both of us have loved dogs since our childhood.  Meeting the breed Boston terrier was love at first sight.

After six months of searching and waiting, in February 2015 our first Boston terrier puppy arrived at our home.  She was Nina from a kennel in Serbia.  She quickly became part of our family. Since we didn't have children at the time, she lived in the house with us. We spent all our  free time with her.

Nina became really clever. Thanks to her beauty and bloodline she was quite successful at shows.

We also met a lot of new people. We simply fell in love with the breed. When she was  two years old

she had eight healthy and beautiful puppies which have new owners now.

Meanwhile our baby boy was also born. He also adores puppies and his first word was „woof-woof“.

Our second Boston terrier was Crazy Girl, whose nickname is Leni. Her ancestors are world champions.  As she was 6 months old when we bought her, we immediately took her to  shows,

where she had fantastic successes: Best Junior, Best of Serbia, Best of Group, Best of Breed.

In the meantime Nina had another litter from which we kept Black Lady, whose nickname is Lady.

Now we have three dogs and we opened up the kennel, called Angelus Domini,

which means Angel of the Lord. We  breed Boston terriers and help people  make their lives happier

with them, because we believe that you can live without a dog

but that's not a life worth living.

I hope you will enjoy surfing our site. 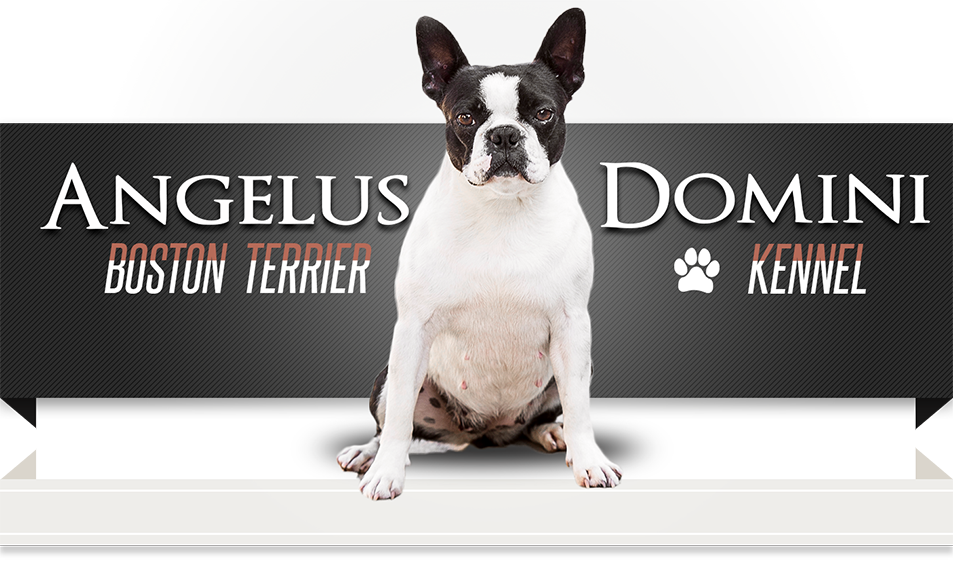 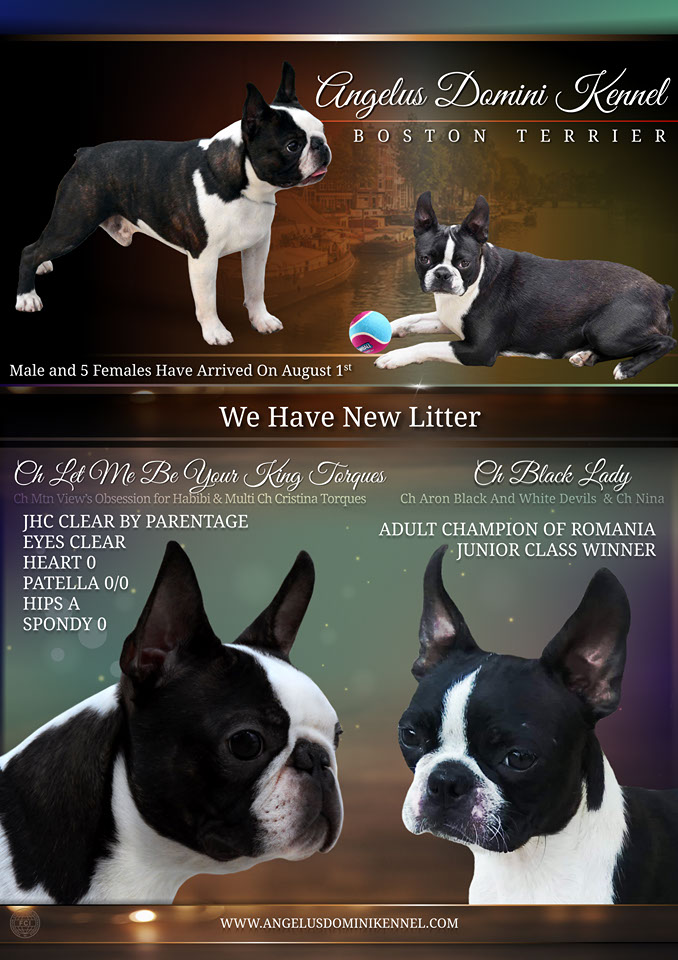 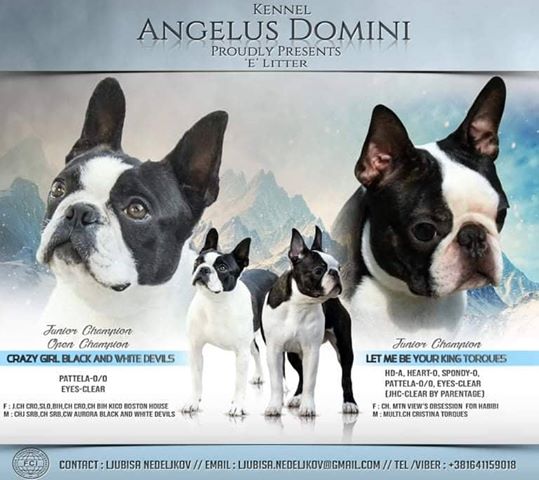 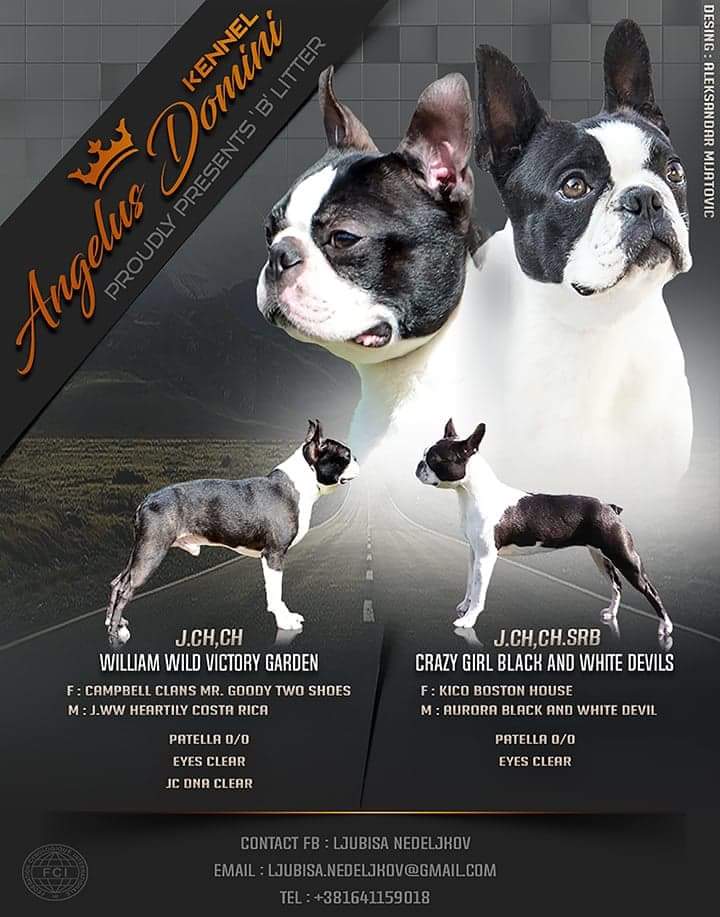 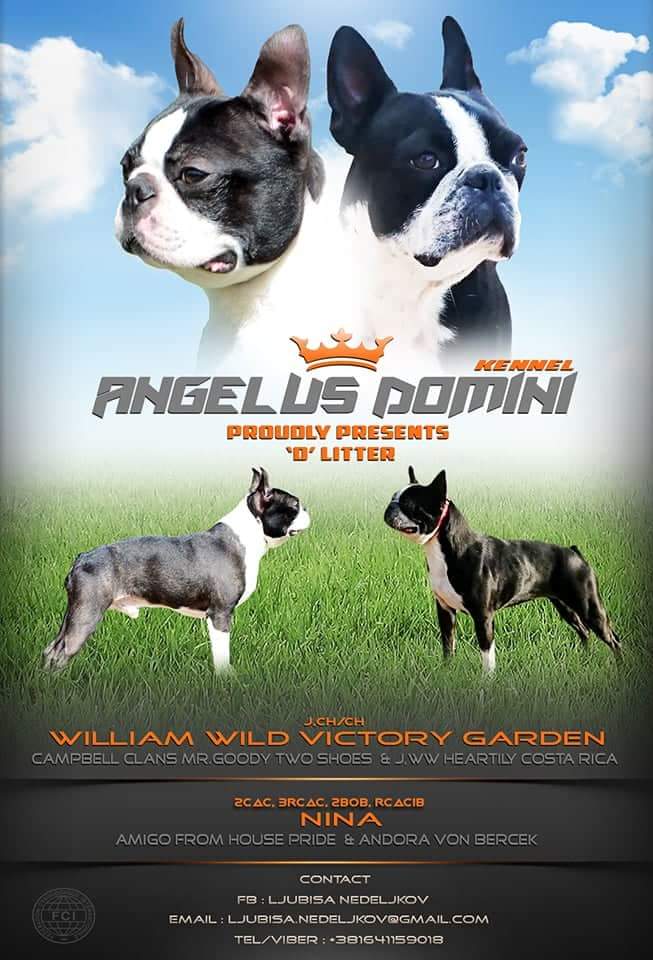 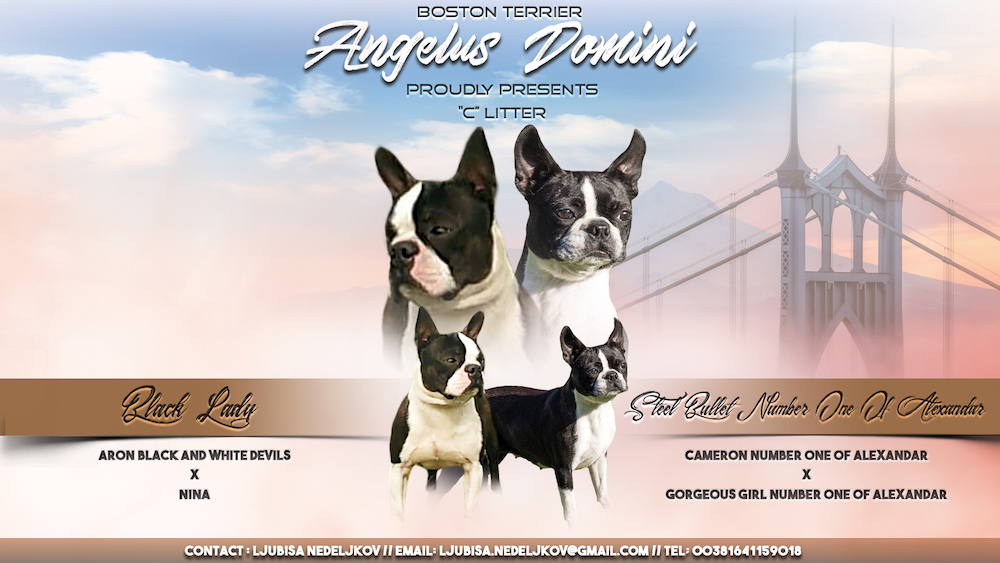 The goals and purposes of this breed standard include: to furnish guidelines for breeders who wish to maintain the quality of their breed and to improve it; to advance this breed to a state of similarity throughout the world; and to act as a guide for judges.

Any departure from the following should be considered a fault, and the seriousness with which the fault should be regarded should be in exact proportion to its degree and its effect upon the health and welfare of the dog and on the dog’s ability to perform its traditional work.

The Boston Terrier is truly an American breed, being a down-sized version of the Bull-and-Terrier types that were so popular in the early days of our country. Breeds thought to have had an influence in the development of the Boston Terrier include the American Pit Bull Terrier, Boxer, English Bull Terrier, French Bulldog and English Bulldog. In the early days of the breed they were often referred to by various names, including Round-headed Bull and Terriers, American Bull Terriers and Bullet Heads.

The Boston Terrier was recognized by the United Kennel Club in 1914.

The Boston Terrier is a lively, highly intelligent, smooth coated, short-headed, compactly built, short-tailed, well-balanced dog. They are brindle, seal or black in color. The Boston is a sturdy dog and must not appear to be either spindly or coarse. Bone and muscle must be in proportion, as well as an enhancement, to the dog's weight and structure. The length of leg must balance with the length of body to give the Boston its striking, square appearance. The strong limbs are neatly turned. The tail is short. No feature is so prominent that the dog appears badly proportioned. When comparing specimens of each sex, the only evident difference is a slight refinement in the bitch's conformation. A proportionate combination of color and white markings are to be given particular consideration in determining the relative value of general appearance to other points.

The ideal Boston expression is a most important characteristic of the breed; it is alert and kind, indicating a high degree of intelligence. The Boston is a friendly and lively dog. The dog conveys an impression of determination, strength and activity; with style of a high order. Carriage is easy and graceful. The breed has an excellent disposition and a high degree of intelligence, which makes the Boston an incomparable companion.

The head is in proportion to the size of the dog, and its expression indicates a high degree of intelligence.

The skull is square, flat on top and free from wrinkles. There is an abrupt brow, and a well-defined stop. The cheeks are flat.

The muzzle is short, wide and deep, and in proportion to the skull. It is shorter in length than in width and depth, not to exceed in length approximately one-third of the length of the skull; and is free from wrinkles. The jaw is broad. The chops are of good depth, but not pendulous, completely covering the teeth when the mouth is closed.

A full complement of strong, white, regular teeth meet in an even bite or one sufficiently undershot to square the muzzle.

Serious Faults: Wry jaw. Any showing of the teeth when the mouth is closed.

The large, round eyes are dark in color and wide apart. They are set square in the skull. When viewed from the front, the outside corners are on a line with the cheeks. The alert, kind expression is an important characteristic of the breed.

Faults: Eyes showing too much white or haw.

Disqualification: Any trace of blue in eyes.

The nose is black and wide, with a well defined line between the nostrils.

The small ears may be left natural or cropped to conform to the shape of the head. They are carried erectly and situated as near to the corners of the skull as possible.

Fault: Ear size out of proportion to the size of the head.

Neck length must display an image of balance to the total dog. The neck is slightly arched, carrying the head gracefully, and setting neatly into the shoulders.

The sloping shoulders are well laid back, allowing for the Boston's stylish movement.

The forelegs are set moderately apart and on a line with the upper tip of the shoulder blades. The forelegs are straight in bone. The elbows stand neither in nor out. The pasterns are short and strong. Dewclaws may be removed from the forelegs.

The body is rather short and well knit. The back is just short enough to square the body. The topline is level. The rump curves slightly to the set-on of the tail. The chest is deep, with good width. The well-sprung ribs are carried well back to the short, strong loins. The flank is very slightly cut-up.

The thighs are strong and well muscled. The stifles are bent and set true. The hock joint is well defined. The hocks are well let down and turn neither in nor out.

The short, fine, tapering tail is set on low and must not be carried above the horizontal. It may be straight or screw. The preferred tail does not exceed, in length, more than one-quarter the distance from the set-on to the hock.

The short, smooth coat is bright, and fine in texture.

The only acceptable colors are Brindle, Seal, or Black, with white markings. Brindle is preferred only if all other qualities are equal. Seal appears black except that it has a red cast when viewed in the sun or bright light.

The required markings are a white muzzle band; a white blaze between the eyes; and a white forechest.

The desired markings are a white muzzle band; an even white blaze between the eyes and over the head; a white collar and white on part or whole of the forelegs and hind legs below the hocks.

A dog with a preponderance of white on the head or body must possess sufficient merit otherwise to counteract its deficiencies. Disqualifications: Solid seal, black or brindle without the required white markings; gray or liver colors; albinism. 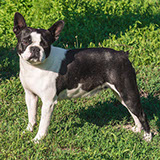 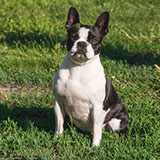 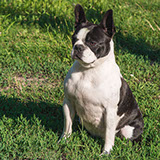 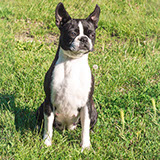 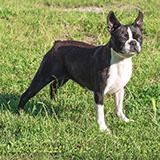 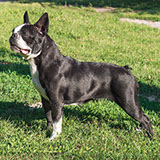 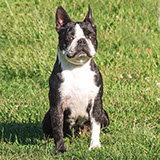 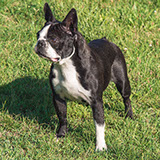 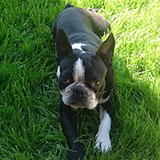 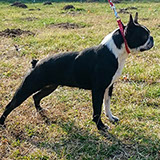 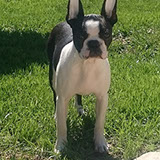 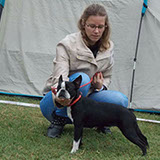 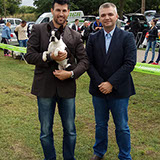 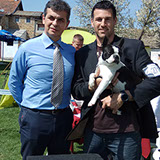 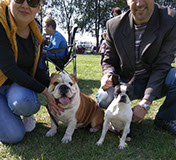 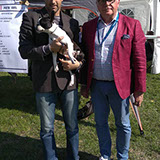 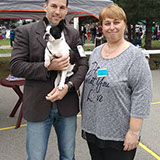 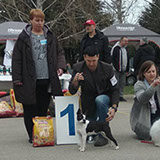 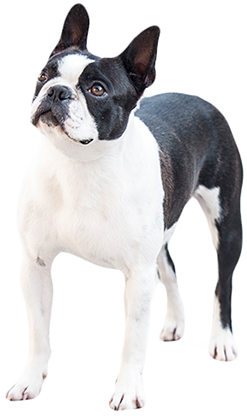